My Article on the "Bareessential" Magazine

In August 2011 I headed toward South Africa, after a long army service and a long research on my itinerary for the 6 following months. My small backpack contained a notebook, anti-malaria pills and my photography equipment – two cameras (Nikon D300 & D70) and three lenses (Nikon 18-200, 12-24 and the 80-400). The equipment was selected carefully in order to be light, good quality and of reasonable price for a six month journey in Africa focused on photography.

My route went through 9 different countries and lasted five and a half months. The route was from south to north – South Africa, Swaziland, Lesotho, SA, Namibia, Botswana, Zambia, Malawi, Tanzania and Kenya. The great distances covered many climates – from beaches, to deserts, tropical or snowy mountains, Africa has it all with great variety of cultures and of course – wildlife.

At the beginning I landed in Johannesburg, SA. No doubt, this city's center is not a pleasant place to be in, and we practically rushed out of the city towards the Mpumalanga Area for great hiking trails and open wide scenery. I often found myself enjoying bad weather days, while others could not understand my joy at cloudy skies. On landscape photography, the weather is a decisive factor – we might enjoy sunny days for our travel – but for the best results, soft homogeneous light which is caused by clouds or sunrise/sunset hours will make the photo much better. Therefore, if you travel for photography, or also for photography – aim at arriving at the end of the cloudy season.

When shooting landscaped single picture of panorama photos – I mostly used my wide lens, Nikon 12-14, with a polarizer on top to increase the contrast of the cloud and sky. Another great technique I learned from a friend is shooting for HDR. This shooting system makes every landscape photo look more pleasant to the eye and is a solution for shooting in hard light. In the Ngorogoro Crater the landscape asks for a panoramic photo –some of my HDR panoramas were stitched from 45 (!) different photos. When I was shooting in the Dead Valley in the Namib Naukluft NP I noticed some clouds approaching, I waited for the sun to hide behind a small cloud to take the "old friends" photo which looks soft although it was shot in the desert.

Another way to treat hard light situations is "don’t fight them –join them". One of the photos I love the most from the Masai Mara NP is the Lioness at sunrise. There was strong backlight which no way I could have "won" – so I decided to let the figure stay dark and make the grass exposure be optimal. It's possible to shoot HDR in these case – but I don’t like HDRing portraits, neither of humans nor of animals. 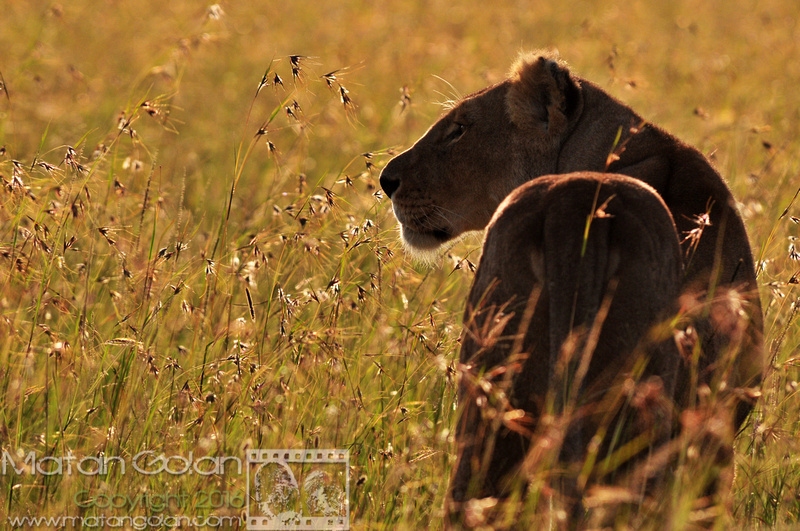 A lioness in the wild

Wildlife observation was one of the main reasons I wanted to go to Africa, although this may be a quite expensive experience when done alone. Make sure you speak with the crew about stopping the car and turning the engine off, to stop the vibrations and ensure taking sharp photos. Also talk with them about which animals you want to see (you might get tired chasing the "big 5" after a while, and want to search for rarer mammals). A great example for that is my Common Bee-Eater's photo, taken in south Luangwa. I was on the safari car with guys who had already seen the big 5, the guide asked us if we wanted to see birds or lions. What would you answer? After I pressed them (a bit), we went for the birds. The car stopped next to the river rim, but we couldn’t see any birds. "Get off the car" he said, and ran towards the rim, and suddenly hundreds of stunning birds were flying around us – a moment to remember. 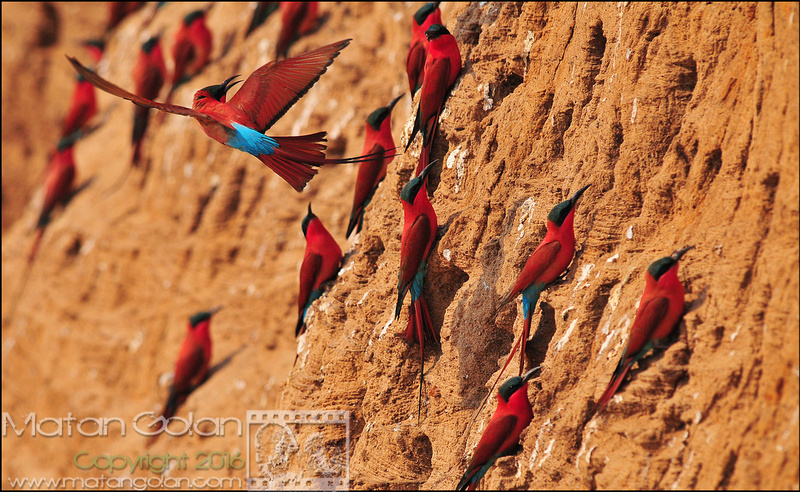 My safari lens was a Nikon 80-400, if you search for it, you will hear mostly bad reports from people – I don’t agree with them at all – it was a great buy telephoto safari lens and when held right, took tack sharp photos. One big disadvantage of the lens is the slow auto focusing system. This was expected to make the lens unsuitable for birds photography – especially in flight. What I have done in this case was focusing on the river rim, and waiting for birds from that area to fly – after a few tries I managed to take that one. You can work with lenses which are not super-fast, VR, 2.8 aperture, with amazing bokeh and still make some great shots – of course those are great lenses, but not for a backpacker in Africa. Know your lenses and make the best from using them right.

In Tanzania I spent over a month and a half, mostly by some unexpected meeting. One day I met some young guys who said they were building a hospital in the Pare Mountains. To say the truth – I didn’t believe them, but I joined them for a couple of days to see what it was all about. I was very surprised to meet six civil engineering students from Canada, part of the "PRECI" group who came to build a maternity ward in a rural area under the Pare mountains. I stayed there for a month – living in the village, with electricity shut-down for three days, hot beer, warm hearted people and a Masai man living in our apartment. Yes – original Masai man who became our friend. Living in the village made you get to know the people in their daily life – what is what every photographer is looking for. Probably only because of that I was able to take the picture of Masai Paulo leaning on his walking stick with the storm approaching behind. 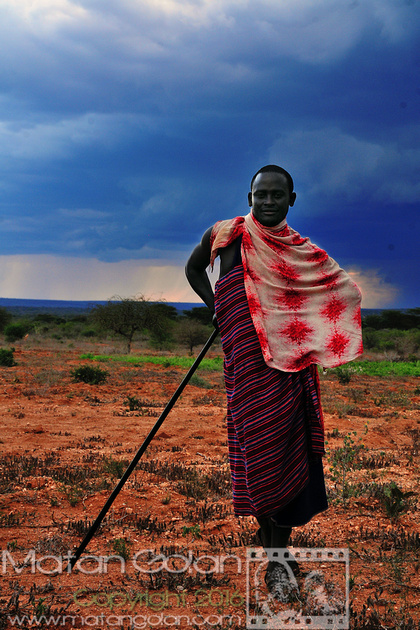 Masai Man in a stormy weather portrait in Tanzania

Another option for the less adventurous traveler is to visit the Masai village in Arusha. It is more industrial, but you will learn a lot about the culture of the Masai people and walk to their village to speak and play with the kids. At the end there is a great show of Masai men wearing traditional clothes and jewelry, I do recommend making a visit. The Masai's are great hunters and loyal people. You will meet in every lodge in Kenya and Botswana a Masai man wearing traditional cloth, carrying traditional weapons, in the heart of a western cities – you can trust these guys. However the Masai's you see on the beach, especially in Kenya,  take advantage of the Masai's man reputation of loyalty, while actually they are pickpockets. You can recognize a "real" Masai by the circled scars on his cheek, which are made in childhood to prevent eye's inflammation (in Arusha's Masai village you will not see it as life over there is quite western). 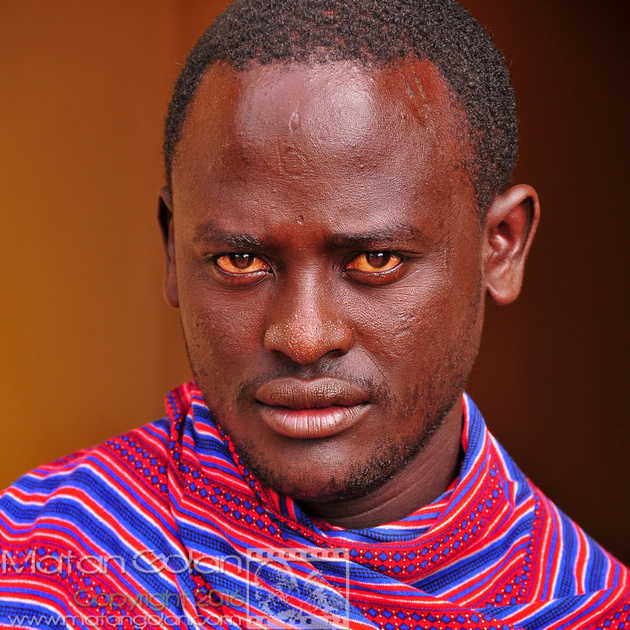 During all of these months in the "black continent" I took great photos – but those photos were at first great moments, and that is a major part of my advice to you. Don’t hold your camera forcing yourself to look for that blue-shirt boy. Walk in the street, talk to people, smell, feel the world living around you in the most natural way of life. Look at the world – the moments you shoot are the moments you feel and not just observe. In August 2011 I headed toward South Africa, after a long army service and a long research on my itinerary for the 6 following months. My small backpack contained a notebook, anti-malaria pills and my photography equipment – two cameras (Nikon D300 & D70) and three lenses (Nikon 18-200, 12-24 and the 80-400). The equipment was selected carefully in order to be light, good quality and of reasonable price for a six month journey in Africa focused on photography. 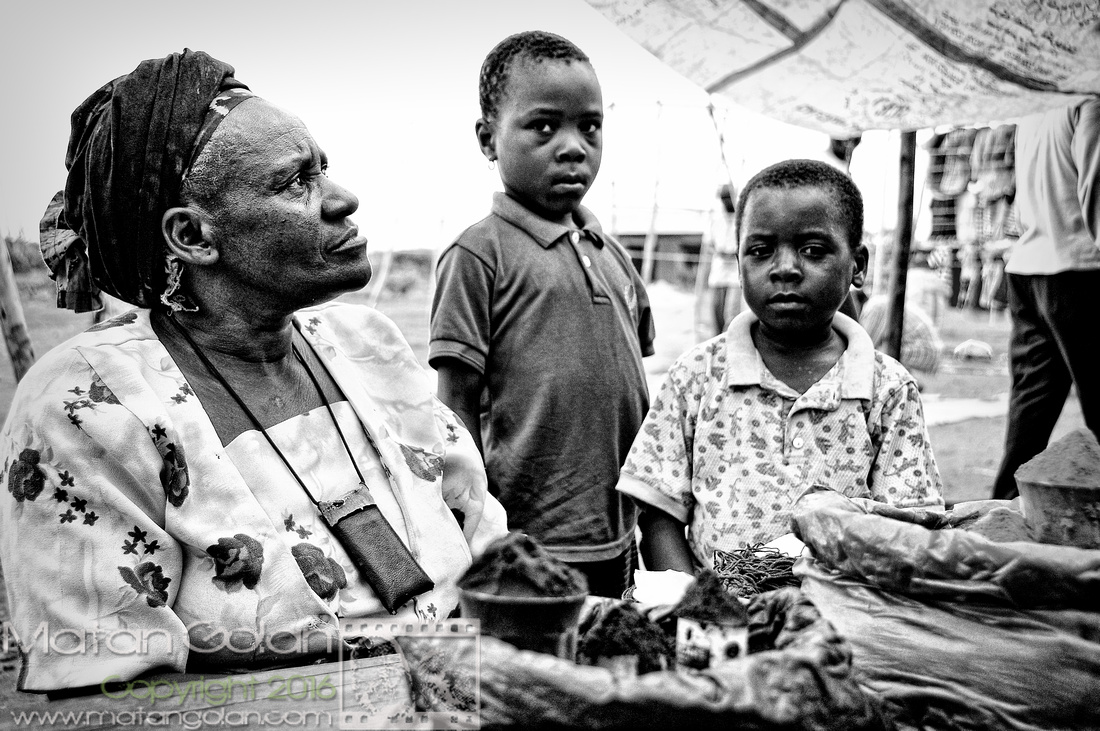 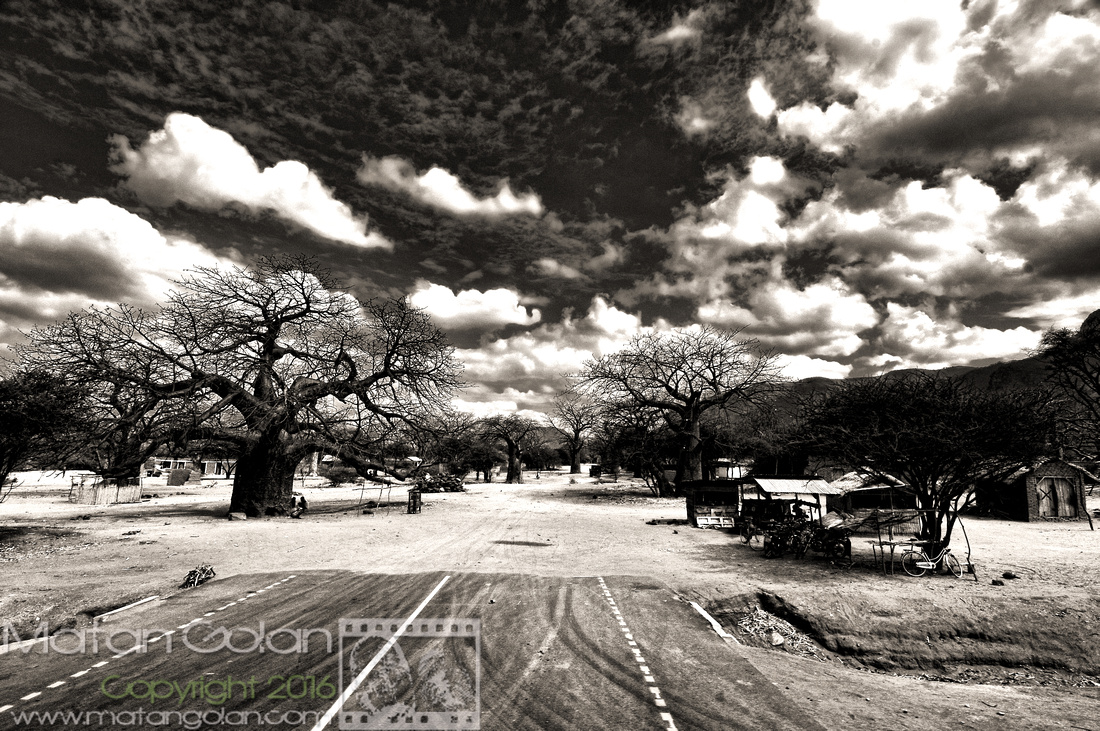 The end of the World